Georgia is a state in the Transcaucasus that lies on the territory from the eastern shore of the Black Sea to the Greater Caucasus Mountains. Although Georgia was formally a separate country only in 1991, during the collapse of the Soviet Union, the ancient kingdoms of Colchis and Iberia existed in this region long before the beginning of our era, and the current capital of the state, Tbilisi, is more

than one and a half thousand years. 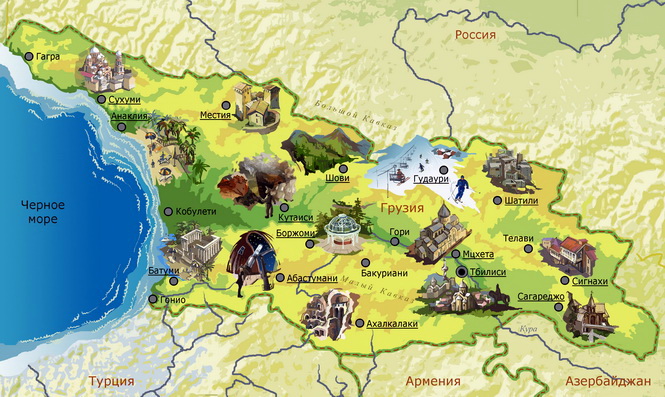 The country borders with Russia in the north and east, with Turkey and Armenia - in the south, with Azerbaijan - in the south-east.

The state language is Georgian. The majority of the population understands and speaks Russian well, with foreigners mostly speaking English.

Most of the population is Orthodox Christians, 10% profess Islam, 2% Catholicism.

When visiting temples, cathedrals and monasteries, it is prohibited to be drunk, in shorts, shirtless men, talking on a mobile phone. Women are advised not to wear open clothes or a short skirt / shorts.

At the entrance you can usually take a scarf to cover the head and skirt, but we recommend taking it with you.

Credit cards are accepted in hotels, large chain stores and restaurants, in Tbilisi and major cities. However, there may be problems with the payment card in small shops and hotels of economy class, in small towns. In this case, you can withdraw money from an ATM or exchange cash for GEL.

It is possible to exchange currency for GEL at bank branches and exchange offices, both rubles and dollars, euros. When exchanging dollars and euros, you can slightly win on the course. Also note that finding a currency exchange office that works with rubles will be a little more difficult. However, they can always be exchanged in large banks, for example, in Bank of Georgia, which has branches at each station of the Tbilisi metro and in each Georgian city.

In case of unforeseen expenses in Georgia, you can receive money through any of the many money transfer systems, for example, Western Union, Contact, Unistream, Moneygram, Golden Crown, etc. The main public transport in Georgia is buses and minibuses. The metro is only in Tbilisi, according to data for 2016 there are 22 stations in it, and the fare is 50 tetri (0.5 lari). To pay the fare, you need to buy a Metromoney plastic card worth 2 GEL and replenish it with the required amount. The deposit value of 2 GEL can be returned by passing the card to the cashier and presenting the check. The same card is used to pay for travel on the cable car, city buses and minibuses.

You can also move between cities by bus or minibus. The main bus station in Tbilisi is located at the Didube metro station, there are several parking lots from which you can go to all corners of Georgia. If you want to go one day to the nearest city, for example, near Tbilisi, check at the ticket office and / or the driver with the time of departure of the last bus back, since it can be quite early, for example, 16.00-18.00.

The main railway station of Tbilisi is located at the subway station Sadguris Moedani. From here, there are trains to Kutaisi, Batumi, Poti, Zugdidi and others.

Tips at restaurants in Georgia are usually left at 5-10% of the order, but there are no strict rules in this regard.